“Never Let Me Go” Exhibition at the Rhona Hoffman Gallery 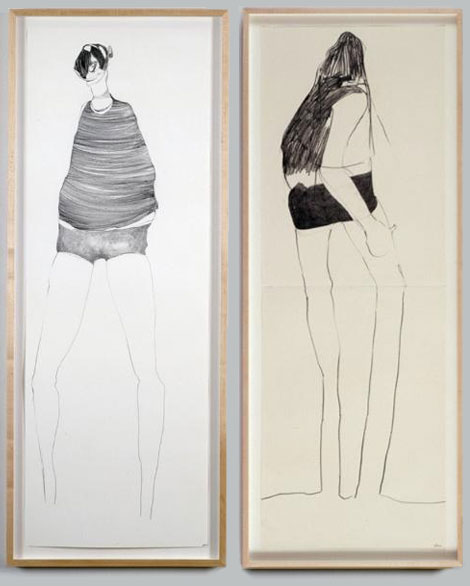 “Art, artifice, and artificial life form the primary lines of inquiry stitched together in the exhibition “Never Let Me Go,” curated by Terry R. Myers. Borrowing its title from Kazuo Ishiguro’s acclaimed Dickensian science fiction novel from 2005, the show tracks the ways in which these three phenomena overlap; in so doing, it provokes questions that cut to the very core of art’s broader significance to society. In the case of Ishiguro’s novel, art is used as a type of “evidence” that cloned (or artificial) children may have souls. Myers’s exhibition alternately deals implicitly and explicitly with the themes of natural and artificial life found in the book.

Among the works included here, Rona Pondick’s Fukien Tea, 2003, hews close to the theme of cloning, with its miniature polished bronze heads growing from a bonsai-esque tree––a form of organ(ic) farming that alludes to the commodification of human subjectivity. Other standout pieces in the exhibition include Folkert de Jong’s The Sleeper, the Talker, and the Dancer, 2007. The sculpture, a nearly fourteen-foot-high multicolored Styrofoam birch tree, is littered with quotidian items and ghostly visages. To an extent, the work recalls the final denouement of the novel, in which the story’s narrator, Kathy, imagines a detritus-strewn landscape as a repository for the memories of her childhood. As with much of de Jong’s output, the tree skews what is represented through its material manifestation and is, by turns, creepy and fantastic due to its seemingly jubilant celebration of artificial nature. In André Butzer’s exuberant abstract painting of a spider, Nicht Fürchten! (2) (Don’t Be Scared! [2]), 2010, we are reminded that while art may reveal the soul, as Ishiguro suggests, it is also a zone where we can give form to our nightmares, which would otherwise remain repressed and unheeded.“